Can Degenerative Disc Disease be Reversed?

While many people think of degenerative disc disease as a natural complication of aging, this isn’t always the case. While the spine does age along with the rest of the body, without any abnormal stress on the vertebrae or trauma, a 100-year-old can still have a healthy spine. That being said, for those who do develop degenerative disc disease, it can often be slowed down and potentially reversed.

Basic Anatomy of the Spine

Basic anatomy of the spine is divided into three sections: cervical, thoracic, and lumbar. Cervical refers to the upper portion of the spine; thoracic is the mid-section; lumbar is the spine’s lower portion.

The spine is made up of individual bones called vertebrae. The cervical portion consists of 7 vertebrae, 12 vertebrae in the thoracic portion, and 5 vertebrae make up the lower lumbar portion.

Each of the vertebrae are separated by intervertebral fibrous discs and their job is to act as cushions between the vertebrae. The outer disc is composed of a hard tough layer while the inside is soft and gel-like. However, there are no discs in the upper cervical spine between the head (occiput), the 1st vertebra (atlas), and the 2nd vertebra (axis).

Role of the Discs

The discs are composed of a hard tough outer layer while the inside is soft and gel-like.

The discs that cushion the vertebrae serve three primary functions:

When a vertebral disc is damaged, the cushioning between the vertebrae is compromised, causing those adjacent vertebrae to rub together. The compromised area of the spine also has less shock absorption, placing more force on the spine.

The ability of the spine’s vertebrae to stay together in a straight alignment can also be compromised, as well as its ability to move freely; these effects can impact a person’s mobility, cause chronic back pain or periodic pain flare-ups, as well as radiating pain into the neck, arms, hips, sciatica and legs.

As the discs have few nerve endings and no blood supply, they cannot repair themselves, which is why it can develop into a chronic condition.

The development of degenerative disc disease is not a quick process. Just as degenerative forces are cumulative, so is the concept by which the condition can be slowed down and potentially reversed: piezoelectricity.

Piezoelectricity is the electric charge that builds up in crystal materials, such as bone, as a result of mechanical stress in the form of latent heat and pressure. This relates to the spine as external forces can change its piezoelectricity.

When an area of the spine is under stress, its charge becomes negative. In order to compensate, positive calcium ions are attracted, based on the laws of opposites attracting. If a spine is weakened due to degenerative changes, the body tries to compensate with an influx of calcium ions to make it stronger.

As structural changes to the spine are occurring through chiropractic-centered treatment and the polarity reversal, the spine’s degenerative disc disease is gradually being reversed.

Although degenerative disc disease can be slowed down and potentially reversed, it’s not a quick process, evident in Horseman and Morningstar’s trial on spinal-decompression therapy and multimodal chiropractic rehabilitation. Just as degenerative effects are cumulative and take their toll over time, reversing the condition is lengthy and can take anywhere between three and five years.

When it comes to scoliosis, there are a lot of uneven forces at work. As scoliosis is largely an adolescent disorder, this is the age group we’ll focus on.

Young people with scoliosis do, however, deal with the abnormal stress that a spinal curvature causes and that can cause disc problems.

If you picture a spine as building blocks stacked on top of one another with a marshmallow separating each vertebrae, you can see how that stack becoming misaligned can push those marshmallows out on one side.

The marshmallows are the discs, and as a curvature progresses, disc compression occurs, which is considered a type of disc degeneration.

As the most common spinal deformity amongst school-aged children in the United States, the National Scoliosis Foundation estimates that close to 7 million Americans are living with scoliosis; that’s a significant number. If you add to that number additional cases from around the world, plus those that are undiagnosed, it becomes clear how common a deformity scoliosis is.

While the cause of the condition’s most common form, adolescent idiopathic scoliosis, remains unknown, that doesn’t mean we don’t have a comprehensive understanding of how the body responds to the condition, as well as how to treat it.

When we think of unequal forces, we need to keep the basic laws of physics in mind: action and reaction. As a spinal curvature develops and progresses, the main visible symptom can be described as a general asymmetry of the body. While these changes can be subtle or severe, the natural reaction of the body is to try and compensate for, and adjust to, the abnormality taking place.

In most cases, adolescents with some form of disc degeneration will move into adulthood unaware of the condition. It’s often not until people start to experience back pain or related symptoms that they seek medical help to determine the source of the pain.

In adolescents, growth is a big factor that affects how they experience back pain. Specifically relevant in scoliosis, the lengthening motion of the spine that takes place during growth counteracts the compression that accompanies disc degeneration and scoliosis.

Most pain from disc degeneration comes from the dura mater, which is the covering around the spine; the dura mater of adolescents is highly adaptable, also making pain a non-issue in many cases. While an absence of pain might seem like a positive thing, in diagnostic terms, it poses a challenge.

Especially in cases of progressive conditions such as scoliosis, early diagnosis is a key aspect of successful treatment. The earlier a patient is diagnosed, the sooner treatment can be implemented and progression monitored and managed. It’s when progressive conditions are left untreated, most often because symptoms aren’t noticed until the condition becomes severe, that a more invasive treatment approach might be recommended.

According to the US National Library of Medicine, the only way to diagnose disc degeneration in children and adolescents is through diagnostic testing via X-ray, MRI, and CT. Without pain to signify there is an issue, young people can live with their scoliosis or disc issues for years before symptoms start to appear. In many cases, pain and other symptoms only appear in severe cases.

X-ray continues to be the gold standard for diagnosing a number of structural issues of the spine. When a patient is sent for an X-ray or MRI because scoliosis or disc problems are suspected, it can tell us a lot about what’s happening in and around the spine.

If an X-ray shows that there is an abnormal sideways spinal curvature, of more than 10 degrees, accompanied by spinal rotation, the next step is to take what’s called a Cobb angle measurement. The Cobb angle uses the apex of the curve to determine how far the scoliosis spine curves and rotates away from a straight alignment.

The higher the Cobb angle measurement, the more severe the patient’s scoliosis is:

X-rays and MRIs can also show a common feature of degenerative disc disease: disc desiccation. Vertebral discs are made up of a tough thick outer layer called the annulus and a soft gel-like center called the nucleus. 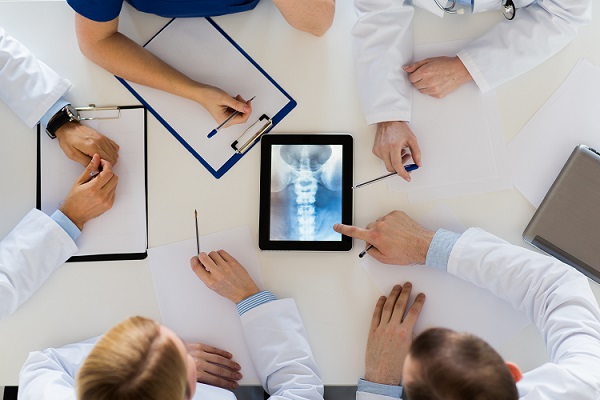 The discs that sit between each vertebrae are filled with fluid. In children, the discs are 88% fluid but this can decrease to 70% in adults. This leads to an interesting fact I find many people are unaware of; people who don’t consume enough fluids are more likely to develop disc disease.

The fluid in the discs allow them to remain flexible to facilitate movement and remain strong. As a person ages, their discs naturally lose fluid and can become dehydrated. If a person is not consuming enough fluid, especially as they age, disc disease can develop.

While degenerative disc disease can be slowed down and potentially reversed, it’s not a quick fix or process. As the effects of disc degeneration are cumulative and occur gradually over time, chiropractic treatment would focus on lessening the stress on the joints to facilitate structural changes.

As the external force of structural correction occurs, changes to the area’s piezoelectricity also occur. Through these structural changes and the gradual reversal of the affected area’s polarity, degenerative disc disease is slowly being reversed.

Despite its name, degenerative disc disease is not actually a disease; it’s a condition that occurs when an intervertebral disc loses integrity. Whether a disc is compromised because it’s pushed out of alignment due to scoliosis, has lost its inner-fluid due to dehydration or natural aging effects, or is caused by trauma or abnormal stress, pain levels vary greatly from patient to patient.

Any source of back pain should be investigated, and seeking chiropractic care can help lead to a diagnosis and the implementation of an effective treatment plan. Especially in cases of progressive conditions such as scoliosis, early diagnosis can be extremely beneficial.

Our CLEAR Scoliosis Institute research study revealed that 95 percent of our scoliosis patients experience relief from their condition without invasive procedures like spinal-fusion surgery. I am extremely proud to say that we are the only non-profit chiropractic organization that focuses on scoliosis treatment and advancements through research, ingenuity, and innovation.

The author’s views are his or her own and may not reflect the views of CLEAR Scoliosis Institute.

2 comments on “Can Degenerative Disc Disease be Reversed?”