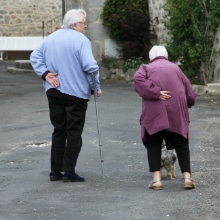 Spinal discs do not necessarily degenerate as people age. However it is common to see discs deplete in people over 40. Most often, lifestyle choices cause friction in the spine that, over time, wears down the discs. Seemingly small compromises or maladaptations can build up to an eventual end result of degenerative scoliosis. For example, poor posture while sitting at a desk day after day, lifting heavy objects incorrectly, or not exercising on a regular basis can all add up to eventual spinal disc degeneration.

Spinal osteoarthritis, which occurs when the joints of the spine break down, and osteoporosis, which is reduced bone mass, often appear together with degenerative scoliosis. Certain people can also be genetically predisposed. Some people have spinal discs that are naturally better at holding water than others, and are thus less likely to wear down and cause problems. It’s often thought that the causes of degenerative scoliosis as we know them boil down to a 2:1 ratio, 2 parts environment and 1 part genetics.

A sedentary life does not a healthy spine make. The root cause of the majority of degenerative scoliosis cases is a lack of motion. Spinal discs are able to replenish their liquid level naturally, but they do this through movement. Healthy spine movement sends moisture and nutrients to these discs via increased blood flow. Without movement and the moisture that it brings, the discs will continue to deplete.

On an x-ray, degenerative scoliosis typically has a steep curve in the lower back (lumbar region), and the middle bone in the curve often slips off to the side (lateral listhesis) due to weak fibers in the depleted discs. The holes for the spinal nerves often shrink as well, causing a shooting pain in the hips and legs. Lower back pain and changes in posture are telltale signs that it’s time for a visit to your chiropractor.

There are only a few traditional treatment options for degenerative scoliosis. Braces are a common treatment for scoliosis in teens. They’re not as effective on a fully developed spine, although some types of soft braces might help with pain in adults. Most treatments center around medication to manage the pain or surgery. Doctors will often recommend surgery to correct the degenerative curve. However, adult spinal surgeries carry a higher risk of complications and more lasting side effects than their adolescent counterparts.

If the spinal discs are deteriorating and causing the problem, the logical way to reverse this would be to restore the health of the discs. Alternative scoliosis-specific exercises and therapies aim to do just that. Asymmetrical mobility exercises and therapies work to strengthen the muscles that have grown lax on the inside of the curve and tighten those on the outside of the curve. They’ve been shown to open up the closed wedge in the middle of the back to increase motion and re-establish good front to back curves. By focusing on balancing and strengthening those muscle groups that have weakened from inactivity on the inside of the curve, the muscles are able to hold the spinal column in its natural position once more.

This is not so different from the alternative treatments of idiopathic scoliosis. Regardless of the cause of the scoliosis, the body falls into the same patterns. When CLEAR doctors treat degenerative scoliosis, they pay close attention to the bone slipping sideways (lateral listhesis) in the middle of the curve. By focusing on this area, they can relieve and prevent the shooting pain in the hips and legs.

Rehabilitation for degenerative scoliosis can take a long time, often a year or longer. But if you’re willing to put in the time and the effort, it can be done. Some alternative treatments can make you feel better right away, but it’s important to keep going with the treatments. You want to stabilize the good curves, so they don’t revert back to their degenerative states.

Walking, proper ergonomics, and spinal exercises can work to prevent degenerative scoliosis from occurring in the first place. It might take a while to get used to, but good posture is also important for spinal health. Sit up straight with your head centered over your shoulders and try to avoid hunching those shoulders. Kind of like brushing your teeth, practicing good posture and doing regular spinal exercises is important for your spine’s health and can prevent all sorts of back problems.

Degenerative scoliosis can be painful and cumbersome, but it doesn’t need to be a permanent part of your life. Without the complications of a risky surgery, alternative treatments have achieved real results. Be sure to talk to your doctor about all of your options before you make your treatment decision.

Have you tried an alternative treatment for degenerative scoliosis? How did you like it? We’d love to hear about your experience in the comments below.