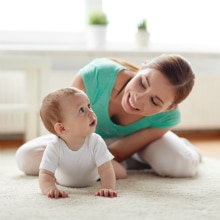 When it comes to infant spine development, parents have a big role to play in protecting their children from pediatric scoliosis. Learn what you can do during the first weeks and months of your child’s life to help ensure they have a healthy back and neck.

If you’re concerned about the early onset of scoliosis in babies and toddlers, here are tips and resources to help you protect your baby and promote healthy habits during five stages of spinal development.

In utero, the fetus is in a fetal position. The fetal curve is considered the fetal or primary curve. This curve protects the fetus in the event of trauma to the mother during pregnancy. After birth, every effort should be made to preserve the fetal curve in the thoracic (or middle) spine. The infant should not be immediately placed on their back in the supine position.

A sling should also be used when carrying a newborn to promote the thoracic kyphosis. Not until the baby is able to pull themselves up and stand for a few minutes should the baby be placed in a front or rear pack upright. Parents should only use the sling with the baby in the side-lying position. Do not place the baby in a front or rear pack too early. Placing the baby upright before the spine matures may lead to spinal instability and scoliosis.

The next stage of development is the cervical and lumbar lordosis, known as the secondary curves. In this phase of infant spine development, a baby will lift their head off the ground in the prone position, or on their stomach. This is when the normal cervical lordosis or forward neck curve is created. Encourage as much “tummy time” as possible during this stage. Lie on the ground facing the infant and lift your head while facing the infant. Then you both can practice lifting your heads. This game will promote cervical lordosis in the baby and parent.

Crawling starts produces the lumbar lordosis or low back forward curve. Place objects out in front of the baby encouraging them to crawl to the object. Also, laying the baby on their back and touching the opposite hand to toe may be helpful in making this neuro-connection. Connecting the opposite foot and hand is known as cross crawl. Cross crawl is a very important step in brain development.

Your baby should be pulling themselves up to stand upright and attempt to walk. Once the baby can pull themselves up, and not before, walking should be encouraged. Missing these developmental steps may cause spinal instability, scoliosis and learning disabilities. Using front packs, backpacks, Johnny Jumpers, Walking Saucers and similar items may be very detrimental to child development and future health.

In conclusion, every effort should be made to enhance the normal cervical lordosis, thoracic kyphosis, and lumbar lordosis. These good side view curves provide strength and stability to prevent scoliosis. Mothers of children with scoliosis and learning disabilities commonly state that “he went straight from sliding on his butt to running, he never crawled.”

Do you have any questions about infant spine development and scoliosis prevention in babies? Please let me know in the comments.

This post was submitted by Dr. J. Hartley of the Hartley Chiropractic & Scoliosis Center. Dr. Hartley has been CLEAR-certified since 2015 and offers both Standard Treatment and Intensive Care at his practice in Florida in addition to serving as a ScoliBrace provider.