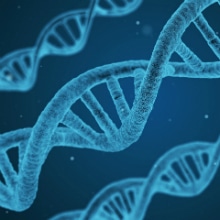 If you’ve been diagnosed with scoliosis, it’s not uncommon for you to be asked if you have other family members who also have it. You might assume that, since scoliosis runs in families, it’s passed down through genes. But is scoliosis hereditary? If you’re a parent, you should know that the genetic factors involved in scoliosis aren’t set in stone. There’s no hard and fast rule about family members passing it on, and researchers continue to dive into DNA to get more and better answers.

In this post, we touch on the science of epigenetics, which examines how signals from our environment can actually influence our genes, turning them “on” or “off” through a process called methylation. By influencing your environment, you can influence your genetic risk — for heart disease, cancer and even scoliosis!

Let’s start by reviewing some commonly-held assumptions about what makes a disease “hereditary.”

What is a Hereditary Disease?

The term “hereditary” in genetics refers to a disease that is directly passed down by one parent (or both) to their offspring through genetic inheritance. Usually we hear about it in regards to diseases that can be passed down by inheriting a single defective gene, like cystic fibrosis. Defects in a single gene (also known as Mendelian disorders) are actually quite rare, accounting for only a small percentage of all known diseases.

Most diseases have genetic associations and predispositions, but they are not truly genetic in the sense that they are caused by defective genes which are passed down from parents to children. In the case of conditions like cancer and heart disease, changing one’s diet and lifestyle can actually influence the genetic risk of someone developing that condition. Your susceptibility to various diseases is not written in stone at birth!

So is scoliosis hereditary? With scoliosis, there’s no clear evidence that parents can pass it onto their children. Unlike true hereditary diseases, there can be a wide variation in the types and severity of scoliosis that develop from generation to generation — if it even develops at all! You might be surprised to learn that scoliosis can develop in one identical twin and not the other.

If scoliosis isn't hereditary, what is it?

We find it more appropriate and helpful to call it “familial,” meaning that there’s a family connection but that it might not be entirely related to your genetic makeup. If you think about it, there are a lot of things that families share other than genes, including things like where they live, lifestyle and even posture. It makes sense that there’s a connection among family members that’s both environmental and genetic.

Scientists have also come to the same conclusion as they look for the root causes of scoliosis. Some people might have a genetic predisposition to develop scoliosis, but you can’t tell if someone has (or will develop) just by looking at their genes. There’s more to it.

These days, it’s common to assume that a disease must be related to genetics when the cause is unknown. And because 80% of scoliosis cases have unknown causes (called idiopathic scoliosis), many people assume that there must be a genetic defect at play. Some studies point to genes related to nerve fiber elasticity, bone density, tissue structure and joint hypermobility as being involved in the development of scoliosis.

However, no one has been able to find a single gene responsible for scoliosis. In turn, genetic research has evolved to look at the interaction of multiple genes as well as the science of epigenetics. The expression of our genes can actually change throughout our lives as certain genes are activated or turned off, and epigenetics studies the role of our environment in this process.

When we talk about the environmental factors involved in scoliosis, it boils down to three main categories:

If scoliosis is ⅓ genetic and ⅔ environmental, as current thinking suggests, then someone with a genetic predisposition and a lifestyle with these sorts of environmental conditions could be at high risk. Luckily, environmental factors are also more in your control. Someone born with very flexible ligaments could perform specific stabilizing exercises, actively avoid exposure to chlorine, and consume foods high in vitamin C and manganese (and other nutrients which promote healthy ligaments) to help reduce their chance of developing scoliosis.

A linear, simplistic approach doesn’t work well when it comes to understanding scoliosis. There’s not one pain or symptom that can be fixed with a predetermined treatment that leads to a predictable result. And when you factor in all of the possible combinations of genetic and environmental influences involved in idiopathic scoliosis, it’s no wonder that standard treatments like traditional bracing and surgery are so focused upon simply holding the spine in place.

With so many different potential reasons for why the spine develops scoliosis, determining the exact reasons why scoliosis developed in a specific individual is extremely difficult. But without understanding and addressing those reasons, the factors that caused the spine to bend in the first place will continue to act against the forced correction.

The CLEAR chiropractic approach to scoliosis means that a doctor is looking at more of the root causes of your pain and limited mobility as well as other symptoms like balance issues. There could be many individual factors to address, from asymmetry in the hips to spinal cord tension. By conducting a detailed exam of each person to see what’s at play, patients end up with a highly customizable treatment plan that balances working with the body and the mind.

While we know that parents in this situation often feel powerless, we hope you remember that it’s not your fault. Parents do not “give” scoliosis to their kids, and many of the same genetic factors that predispose someone to develop scoliosis also give them a competitive edge when it comes to sports that emphasize flexibility.

For families where scoliosis is found across generations, parents have the advantage of knowing about the possibility that a child might be at risk. Awareness means that they will be prepared to do early screenings between the ages of 6-10, which can lead to earlier and more effective intervention.

Lastly, it’s important to understand scoliosis as an adaptation rather than a disease. When you start to understand why the body develops the scoliosis in order to adapt and function, then you can truly start to unravel the mysteries behind its potential causes.

There’s still a lot to learn about inheritance and the lifestyle and environmental factors that lead to scoliosis. And although there aren’t one-size-fits-all treatment options available as research continues, we’ve found that scoliosis patients benefit from a chiropractic approach like CLEAR treatment that is as individual as their case.

Are multiple members of your family affected by scoliosis? Do you have additional questions about the genetic and environmental factors involved in scoliosis? Let’s talk in the comments.

15 comments on “Is Scoliosis Hereditary?”