Michael's Story: Why You Shouldn't Watch and Wait 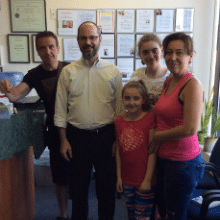 “Scoliosis treatment without surgery?” That’s what Michael Kosta thought when his 9-year-old daughter Alice was diagnosed with scoliosis. He and his family had been told surgery was the only way.

Over the last 35 years, I have successfully treated many scoliosis patients using the CLEAR technique. Many of them have the same story. After getting a scoliosis diagnosis, they are told that surgery is their only choice.

Many are told their condition will continue to get worse. These families are told that their only option is to “watch and wait” while the curve progresses to a point where surgery is needed.

I’m here to tell you that there is another option. Using the CLEAR method, doctors like me have helped thousands of patients to avoid surgery, and I want to help you to do so, too.

If I could show you an option to correct your child’s scoliosis without surgery would you take it? Are you looking for an alternative to surgery and “watching and waiting” like Michael did?

Back in 2014, Michael wanted his 9-year-old daughter, Alice, to have a normal childhood. He wanted her to do the things she loved most like gymnastics, trampolining and riding horses.

However, after a visit for a routine checkup, Michael found out that his daughter had a 25 degree scoliosis. The doctor referred them to an orthopedist who instructed the family to simply "wait six months and then come back."

This “watch and wait” approach is typical with a scoliosis diagnosis. The curve is not severe enough for surgery, but the doctor is not educated about exercise-based treatments, so the family is simply told to wait until the curve gets worse.

Waiting was not something Michael wanted. However, like many, he accepted the orthopedist’s suggestion and went home.

Six months later, Michael came back to the orthopedist for a reassessment. His daughter’s scoliosis had progressed from 25 to 32 degrees. The orthopedist now placed her on restrictions. She wasn’t able to do her favorite activities like gymnastics, horse riding, or trampolining.

Worse yet for Michael was the talk about spinal fusion. Doctors told him that they were now waiting for his daughter's spine to hit 40 degrees, at which time she would undergo spinal fusion surgery. His daughter left the hospital with no hope, being told that nothing outside of surgery could be done.

Michael felt like doctors were telling him that he and his family had to wait for the inevitable. That there was nothing that could be done.

However, Michael refused to accept this. He knew that there must be another way to reduce the curvature. He refused to sit around and wait for his daughter's condition to deteriorate further.

Michael then began a 3-day search, learning as much as he could about treatment options. Like most parents, he wanted to fight for his daughter, and he spent the next three days without sleep, scouring the internet for the solution that he knew must be out there.

He came across many other specialists who recommended the same treatments the orthopedist had: bracing and then surgery. Others recommended standard physical therapy, but his research showed him that this would not work in his daughter’s case.

On the third day of his search, Michael found my website and discovered the CLEAR method. After reading the literature and speaking to me over the phone he was ready to commence treatment.

“Dr. Strauss gave me the confidence and the belief that it could work.” – Michael Kosta

It wasn’t easy for Michael. He and his family lived in London and had to travel to my practice in the United States. This is not uncommon, however. Scoliosis patients come to see me from all over the world to receive CLEAR treatment and avoid surgery.

To make matters even more difficult, many of his friends and family thought he was crazy to travel so far and said he was taking far too big a risk. The orthopedist told him that it was impossible to reverse scoliosis with exercises-based care and ridiculed Michael for suggesting it.

However, despite these challenges, Michael brought his daughter to see me and receive an intensive CLEAR treatment.

After only two weeks his daughter's curve had reduced from 36 degrees to 25 degrees, a reduction of 31%. The family was overjoyed. It was something they had been told was not possible. Upon returning home, Alice’s original orthopedist verified the reduction and congratulated them.

"It was like a miracle to see our daughter's spine reduced from 36 degrees to 25 degrees." – Michael Kosta Before and after X-rays showing Alice’s successful treatment

CLEAR practitioners have something other doctors do not. We call it the CLEAR method: A unique three phase treatment program designed to correct spinal curvature in a non-invasive way. Using specialized equipment and techniques we retrain the body and brain to halt the progression of scoliosis and reduce its curvature, in many cases to 10 degrees or less.

Our clients enjoy a lifetime of results, without the danger of surgery.

You may have wondered why your current treatment plan is not working for you or your child. The fact of the matter is many doctors simply do not have the specialized training or facilities to treat scoliosis using the proprietary techniques used in the CLEAR method.

Michael recently flew out to our clinic for the second time. His daughter received treatment that reduced her scoliosis even further. This time, he also brought along his second daughter, Sophia, for treatment, who was also recently diagnosed with scoliosis. Both of his daughters will return home with customized home exercise plans that allow them to continue to improve their curves.

Thank you for taking the time to read Michael’s story. If you or your child needs help reducing scoliosis, the CLEAR method offers you the best alternative to surgery. Many scoliosis patients receive CLEAR treatment after years being told surgery was the only way.

Like Michael, you may be skeptical, but after only a few weeks with great results, you can regain hope. Let Me Help You With This Gift

I want to extend a gift to you. This guide for natural scoliosis treatment was put together by me, Dr. Andrew Strauss. It is a comprehensive guide to scoliosis and how the CLEAR method can treat your curvature. You’ll also learn:

Simply enter your email address below to receive your free copy!

This post was submitted by Dr. Andrew Strauss of The Hudson Valley Scoliosis Correction Center. Dr. Strauss has been CLEAR-certified since 2008 and offers both Standard Treatment and Intensive Care at his practice in New York.

11 comments on “Michael's Story: Why You Shouldn't Watch and Wait”