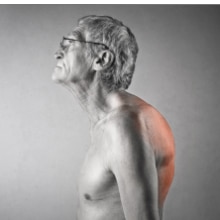 Although a difficult name to pronounce, Scheuermann's disease is fairly easy to understand. The condition occurs when the upper back is too rounded and gives you a hunched appearance. The name is pronounced ‘Sherman’ (at least by most English speakers) and comes from Holger Werfel Scheuermann, a Danish radiologist who first researched the disease in 1920.

What Exactly is Scheuermann’s Disease?

Medically speaking, Scheuermann’s disease is a forward curving in the upper spine of 45 degrees or more, caused by 3 or more vertebrae wedged together. Ordinarily, vertebrae are rectangular and stack one on top of the other with a spinal disc in between each one as a cushion. When the vertebrae grow at different speeds (often a faster growth in the back of the vertebrae than in the front), they may grow in a wedged triangular shape and stack unnaturally, causing the forward curve.

Scheuermann’s disease becomes apparent around the time of a child’s first major growth spurt, usually between the ages of 10 - 15, with the most common symptoms being slouching and back pain.

Since the curve is in the sagittal plane (viewed from the side), it’s not technically scoliosis, which only includes curves in the coronal plane (viewed from the front or back). Instead, it’s included under the umbrella term “kyphosis”, a more general term for a backward-pointing curvature. What sets Scheuermann’s disease apart is the abnormal growth of the vertebrae, which is not necessarily the cause of your average kyphosis. Other kyphoses include postural kyphosis, hyperkyphosis and dowager’s hump (but we’ll get more into those in future posts).

It is possible, however, to have both scoliosis and Scheuermann’s disease, which means the person has at least one curve in each plane. We call this kyphoscoliosis, or scoliosis with a kyphosis. Unlike a scoliosis curve, the rigid Scheuermann curve doesn’t quickly collapse, so it is less likely to worsen once it’s formed and the person is finished growing. In more severe cases and without any sort of treatment, the curve has been known to increase over time.

There is no consensus among the medical community as to what causes the vertebrae to grow wedged or at different rates. Some doctors have hypothesized that it’s due to injury, but many conclude that it’s more similar to idiopathic scoliosis, meaning the cause is an unknown combination of genetics and environment.

Scheuermann’s disease is characterized by a rigid forward curve in the upper back that becomes more exaggerated when you bend over. It’s associated with the following symptoms:

Since the curve is in the upper back, it can impede on the chest cavity, causing the lungs to have less room and affecting their ability to fully function, which can affect other organ function as well.

Similar to that of scoliosis, traditional treatment involves observation or bracing for children or adolescents still growing. The braces are designed to take pressure off the front of the vertebrae and allow its growth to catch up to the back of the vertebrae. Surgery is only recommended if the curve is not improved after a number of years wearing the brace.

There are also alternative treatments you can explore if you are not interested in wearing a brace or an invasive surgery. Specialized exercises, stretches and therapies have been known to improve a kyphosis. Stretching the hamstrings and back can act as an effective pain reliever to those with Scheuermann’s disease. The Scoliosis Traction Chair, developed by CLEAR, has successfully used vibrations to relax the muscles and work over time to restore a natural curve to the upper back and neck. CLEAR Doctors have also developed specialized cantilevers and weights that can be worn to help restore a more balanced, natural posture.

Mild cases of Scheuermann’s disease are often mistaken for poor posture and not diagnosed. The risk of misdiagnosis or failing to treat Scheuermann’s disease right away is that the treatment may not be as effective later on once you’ve finished growing. Alternative treatments can help people from all walks of life, but the corrections may be limited based on the severity, or may take several years to accomplish.

Scheuermann’s disease is treatable! It doesn’t have to be a permanent pain in the neck (and back). Talk through all available treatment options with your doctor to decide which one is best for you.

Have you been diagnosed with Scheuermann’s disease? What treatments have you found helpful or harmful? Share your experiences or questions in the comments below.